During the Holocaust more than 12,000 Jews were gassed every day in Auschwitz’s gas chambers. Amongst them were the wife and 11 children of Rabbi Yekutiel Yehuda Halberstam, scion of the famous Sanz Chassidic Rabbinic Dynasty. 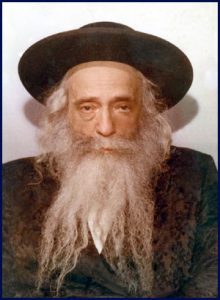 In June 1944, 10,000 inmates, including the 39 year old Rabbi Halberstam, were transferred from their camp to Warsaw. There they were ordered to dismantle what was left of the burned out buildings of the Warsaw Ghetto and load the debris on to waiting trucks that would take them to Germany.

By the end of July, the 2,000 inmates who had survived the Nazi brutality were ordered on a march to the infamous Dachau Death Camp in the German heartland. The tormented frail inmates were forced to walk 20 kilometers a day under the torturous August sun. Those who could not maintain the pace were instantly shot by the drawn rifles of the bloodthirsty S.S. Guards.

Rabbi Halberstam was shot in the shoulder and a lost considerable amount of blood, but seeking medical help was out of the question. As he was losing his strength he made a vow to the Almighty G-d: “If I merit to survive I will garner all my energies to build a hospital in the Holy Land where every human being will receive the same dedicated medical care irrespective of nationality or creed.” He at the same time noticed a tree with luscious green leaves along the road within reach of the marching inmates. The Rabbi tore off a large leaf and with his last ounce of strength managed to place it on his wound. The bleeding stopped and the Rabbi survived.

Upon conducting his first inspection of the Displaced Persons Camps in the U.S. Zone of occupied Germany, General Dwight D. Eisenhower stumbled upon the makeshift Synagogue in Feldanfing (near Munich) where survivors were assembled for Yom Kippur services. General Eisenhower was greeted by Rabbi Halberstam, who represented the thousands of survivors. Eisenhower inquired about the conditions in the D.P. Camps, wanting to hear the concerns of the survivors. So impressed was the General by the intelligence, selflessness and strength of spirit of this physically destitute Rabbi that he decided to ask him for a personal blessing. The Klausenberger Rebbe helped Jews rebuild their lives after the Holocaust. My grandmother’s cousin Rabbi Aharon Yehudah Wilner had the privilege of being the head of the American Klausenberger Yeshiva a yeshiva being an advanced studies religious school. In this way he helped the Rebbe rebuild and strengthen Jewish religious life in the United States. But the Rebbe was also involved in helping Jews come to Israel.

When the Sinai Campaign War between Israel and Egypt– provoked by Egypt’s blockade of the Port of Eilat – was launched, the dynamic Chassidic community of Kiryat Sanz in northern Netanya in Israel was already well established. The first multiple dwellings were already standing and inhabited. Construction of a flourishing diamond factory built by one of New York’s leading diamond merchants was progressing rapidly. A brick factory to produce building blocks necessary for the ongoing construction was established. Educational facilities for children and a Community Center for adults were built.

Realizing that the fast-growing City of Netanya was still without a hospital, Rabbi Halberstam resolved that the time had now come to uphold the vow he made during the fateful march from Warsaw to Dachau in August 1944. He dedicated a prime plot of land on the northern edge of Kiryat Sanz, commissioned architectural plans and in 1958 the cornerstone was laid for a modern general hospital. The hospital would include all basic medical departments and ancillary services required for a municipal hospital.

Recognizing that no source of continuous funding was available for the project’s construction Rabbi Halberstam decided to build the hospital “brick by brick” depending on the availability of funds that he would be able to raise. Consequently, construction of the hospital building progressed at a very slow pace. Nevertheless, the Rabbi was determined to proceed with this vital project despite the difficulties. After years of determined effort and overcoming insurmountable hardships, the hospital was opened on June 21, 1976.

Since opening its doors in 1976, Laniado Hospital – Sanz Medical Center has emerged as a modern and highly advanced medical center with expertise in almost all major medical disciplines. Its modern 430 bed comprehensive health care facility is the only hospital serving Netanya’s 350,000 residents as well as the rapidly growing city’s surrounding towns and villages. Laniado is recognized throughout the country for its quality medical care, often attracting patients from around the country.

Following the creed of its founder, Rabbi Halberstam, Laniado Hospital ministers to all people, Jew and Arab, rich or poor alike. Its physicians and nurses all subscribe to a set of principles that place the dignity of all patients first. Laniado Hospital’s medical staff personifies the maxim of selfless dedication to patient, and every patient benefits from some of the world’s most advanced medical technology regardless of age or ability to pay. The medical and nursing staff have never left their patients, it is the only hospital in Israel whose devoted staff have never participated in the many recurring strikes affecting the Israeli health system.

As the only medical facility in Netanya, Laniado maintains a huge ambulatory care program in general medicine, pediatrics and women’s health. Besides the hospital’s impeccable medical/surgical departments and units, diagnostic, therapeutic, and research facilities, the growing Laniado Medical Complex includes a three story Geriatric and Rehabilitation Center, an award-winning School of Nursing, a state-of the art Children’s Hospital, and an all-inclusive Diabetes Center.

At a Benefit Reception for Sanz Medical Center/Laniado Hospital, Ambassador Maxwell Rabb, Cabinet Secretary and close confidant of President Eisenhower, revealed that Eisenhower had mentioned to him on several occasions the blessing he had received from a Jewish Rabbi in the D.P. after the end of the war. The President recalled the Rabbi’s assurance, “that in merit of his leading role in liberating the Jewish People from the most evil power in the history of mankind, the Almighty will bless him to ascend to the highest leadership position in the Free World”.

This article is based on and quoting material from http://www.laniadohospital.org/

Laniado needs your support. Dovy Asper (Author of Post) gave them $18 and got a nice thank you telling him of the great healing help they give. If you give, the Rebbe, Dovy believes will certainly be giving a good word for you in his eternal home above. He is no longer alive but his vision, caring and good deeds live on. You can contribute by clicking on http://www.laniadohospital.org/donate/