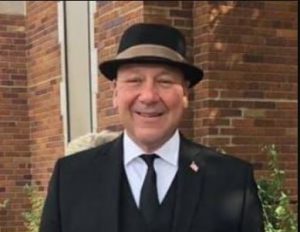 In case you don’t know, there is a Republican mayoral option, and his name is Tony Moreno, a retired Pittsburgh police detective. He’s not the big budget candidate, and doesn’t come from a long line of blue blood money, but his message is strong and his ideas to fix the many problems facing today’s Pittsburgh are solid.

I decided to do an email interview with Mr. Moreno to help introduce him to the general public. This was a fairly soft interview because the intent is just that, to introduce the opposition to the current mayor and his administration.

Anyone who’s had the pleasure of meeting Tony could quickly see that he’s a larger than life character with a genuinely kind heart. As a long time police officer he’s seen the good, bad and the ugly our city has to offer, and now that he’s retired and with his wife Patty by his side, he’s taken on his next challenge… to unite our city and help uplift the many struggling neighborhoods left behind by current Mayor Peduto. 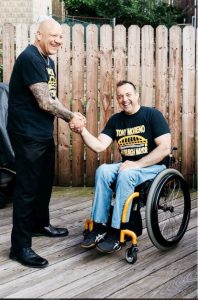 I emailed Mayoral candidate Tony Moreno 5 questions, and here was his response:

Q) Tell us a little about your background, both career and lifestyle. Were you born in Pittsburgh, or did you move here… and if so… how did you end up in this city?

A) I was born in Stanton, California and raised in Whittier (near L A). I joined the Army when I was 17 and after several years I met my first wife and got married. After my time in the military, she wouldn’t move back to California with me and she was from Youngstown, OH where we moved to. I applied to the Pittsburgh Police department and got hired which is what brought me here.

Q) *How would you describe your political views/stance?

A) I have always been a union member in my adult life like my father, I am union first and I believe every voice matters. I believe in freedom and I do not judge how people live their lives. We are a country of laws and the constitution is our guide. I have live a-politicly because politics have no place in Law enforcement.

Q) Did you always have political ambitions? If not… what made you decide to run for mayor of Pittsburgh?

A) I have always followed politics being in the local government as an employee and having been in the United States Military we fight for all rights to include the right to vote. However, I never had any aspirations to be a politician. I had planned to retire and move to Florida but the state of affairs in the City of Pittsburgh under Bill Peduto and these career politicians is unacceptable and abusive. I cannot leave it the way it is now without trying to make it better.

Q) What do you think is the biggest problem facing our city, today?

A) Race. The racial divide, the opportunities for the minority population in Pittsburgh are structurally different than the opportunities for everyone else. These problems are generational and have spurred systemic racism. These issues aren’t racism in the way of burning crosses and donning white sheets. It is a political corruption in controlling communities for the politicians desired outcome. Shutting out minorities and preventing these citizens from reaching their full potential in our city is an abhorrent travesty. 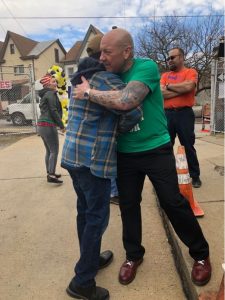 This has led to the destruction of harmony throughout our neighborhoods causing a never-ending strife. These problems can be positively addressed with a commitment to true equity in opportunity and a dedication to the human condition. We all want the same thing. Financial freedom, mobility and ownership. These things bring families together, reduce crime and create positive growth and cohesion in our neighborhoods.

Q) You seem like a very approachable candidate. What’s the best way for people to get in touch with you?

A) I answer my cell phone for anyone, I have email, and the campaign has a website.

The best way to connect with me is to talk to me in person. The written word does not convey my passion for the success of Pittsburgh as a community in concert. My fight for the community is why I am in this. I do not stand for bullies, abusers or weak leaders and that is all we have in our local political system. 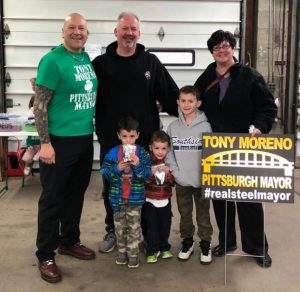 Tony Moreno is married to Dr. Patty Poloka who is a retired Army Major, Police Detective and Polygraph Examiner. Tony has 2 adult children and 2 grandchildren. He is also step-father to his wife’s 3 children where they currently live in their North Side home. Tony Crawford Moreno grew up in Whittier, California as the oldest of 3 children. Deceased father Joe (Jose) Louis Moreno, retired as a satellite technician at Boeing. Mother Joann Isaacs Moreno, was a travel agent and is currently an office manager in Southern California. Tony’s two siblings (Marla and Mark) still reside in California. Both mother and father were Deacons in their church providing a strong biblical foundation for Tony.

Tony volunteered enthusiastically for his youth group to provide young and old alike with faith-based ministry. He helped build housing shelters in Mexico as a youth and collected and distributed food, clothing, and medicine for the impoverished residents of Tijuana, Rosarita, and Ensenada Mexico. At the age of 16, Tony volunteered for environmental clean-up after an oil spill off the Southern California Coast.

Tony graduated from California High School in Los Angeles. During his time at “Cal High”, he participated in football, baseball, track, debate club, year book, and student council. Tony enjoyed spending time at the beach surfing, body surfing, boogie boarding, playing volleyball, skateboarding and riding his bicycle. When Tony was 17, his mother signed for him to enlist in the United States Army as an Airborne Military Police Paratrooper. He proudly served at the height of the invasion of Panama where he was deployed twice. Active duty took him to Fort Bragg, North Carolina for 3 years and Germany for 2 years. After completion of his military contract, he worked as a plumber apprentice until he attended the police academy in Ohio. He was offered employment by several Ohio Police agencies in addition to the Pittsburgh Bureau of Police (PBP). He chose Pittsburgh Police in 1994 where he proudly served for 24 years.

Tony worked hard and lead the city in arrests during the Federal Justice Department Consent Decree as a uniformed police officer (L.A. Times, Oct 15, 2000). He earned his way into the Narcotics Unit where, again, he led the city in arrests with the lowest complaint to arrest ratio (>1% complaints to arrests), while the Consent Decree was still in place. In the final years of his law enforcement career he volunteered to work downtown to restore a positive business climate, public safety, and enjoyable visitor experience while addressing the needs of the homeless and citizens with mental illness in the business and cultural districts. Tony gained the respect of the Cultural Trust and Downtown Pittsburgh Partnership as he met with the leaders to assist them with issues. As a Crisis Intervention Team (CIT) Officer, he was able to recognize at-risk individuals and used necessary diversion resources as outlined in the data-driven Sequential Intercept Model (SIM). The SIM is a critical tool in CIT for the diversion of individuals from incarceration and into programs and/or mental health treatment. Tony attended all CIT supplemental courses to learn specific concerns affecting veterans, youth, and the LGBTQIA+ population, in the City of Pittsburgh to equally serve the community in the most effective and respectful way possible. Today Tony is a verbal de-escalation trainer for police officers in Allegheny County.

Tony is an animal lover and advocate. He volunteered at the East Liberty animal shelter walking dogs which were classified as aggressive to save them from being euthanized. Some of these dogs were rescued from dog fighting rings by Tony in the course of his police work. Tony enjoys hunting, fishing, and is extremely environmentally conscious.

Since retirement, Tony volunteered for the Community Supported Agriculture (CSA) program by sorting produce weekly to bring health food to law enforcement in 2018. He currently volunteers quarterly at wellness fairs since 2018. He has been an assistant coach in youth baseball in Brighton Heights and also helped with youth basketball. Tony and his wife volunteered many hours to a local Cub Scouts Den. Tony volunteers his time 2 days per week delivering for Meals on Wheels to support elderly members of the community.

Tony participates in his local union (Fraternal Order of Police Lodge #1) where he is an active member in good standing. Tony completed the rigorous process of obtaining the distinction of Private Detective in Allegheny County in 2018. Over 2017-2018, Tony absorbed the majority of household responsibilities while his wife completed her Doctorate in Management and Organizational Leadership, attended polygraph certification school, and subsequently established her own polygraph business. 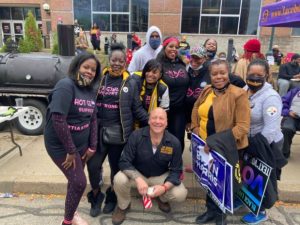 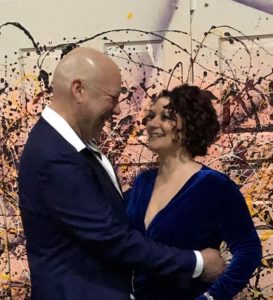 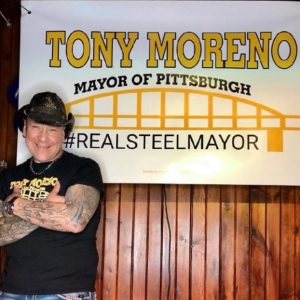