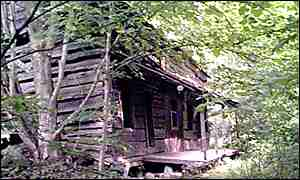 Melungeons, dark-skinned mountaineers of eastern Tennessee, southwest Virginia and Kentucky, have sparked myths and theories over the past century: among them that they were descendants of shipwrecked Portuguese sailors, or the Roma, the Gypsies. Some have speculated on connections with the Lumbee Indians in Robeson County or the Lost Colonists of the Outer Banks. The traditional view is that they are of mixture of black, white and Native American origin.

For centuries, they remained almost invisible to the American mainstream. They live hidden away on inaccessible mountain ridges, and a racially segregated society wrote them off as a mixture of white, black and American Indian. Now, evidence is emerging which suggests that the Melungeons may have been among America’s very first settlers, arriving in Appalachia long before the Northern Europeans.

The name likely comes from the French “melange,” a slur most often used by suspicious white neighbors in the days of the Jim Crow South, when African-Americans and anyone with dark skin faced prejudice and segregation.

Researchers have theorized that Melungeons may have been a mixture of European, African and Native Americans. A DNA study in the Journal of Genetic Genealogy in 2012 found that the families historically called Melungeons are the offspring of sub-Saharan African men and white women of northern or central European origin.

In the segregated South, any trace of black blood mattered legally. Virginia passed the Racial Integrity Act in 1924, the so-called “one drop” rule that would strip anyone of mixed race from white legal privileges. Melungeons through history were often shunned and pushed off to the edges of the economy.

The conventional wisdom, suggests that Appalachia was settled predominantly by English, Scots and Irish people. But to many, like a certain, Dr Brent Kennedy, that did not appear to be the whole story.

When he began to research his ancestry, Dr Kennedy found evidence that the first people to arrive in Appalachia, were not northern Europeans which includes people from the British Isles, but may have been Ottoman Turks. Portuguese settlers brought Turkish servants with them in the 16th Century.

Sir Francis Drake unloaded hundreds of other Turks after he liberated them from the Spanish in 1587. Blood typing has confirmed close similarities between present day Melungeons and people of the Mediterranean region.

What has now become known as the Kennedy theory is that these people pushed inland and settled down with American Indian women, to begin life as farmers. With his team of researchers, Dr Kennedy has found hundreds of words in local Indian dialects that have almost the same meaning in Turkish or Arabic. The Cherokee word for mother for example, is Ana Ta. In Turkish, the word for mother is also Ana-Ta.

Dr Kennedy says the word Melungeon is derived from the Arabic “Melun-Jinn” meaning one who has been abandoned by god – a cursed soul.

His theory is that when white settlers arrived in the region and saw that these dark skinned people had already taken the best land in the valleys, they pushed them out and into the high mountain ridges where Melungeons live to this day. The word Melungeon was considered a racial epithet, and the specter of the dark people of the mountains was used by Appalachian mothers to scare their children into good behavior.

In the segregated South, local bureaucrats described Melungeons as mongrels and half -breeds, and they were classified black and denied education or the right to vote. Others moved away in the hope of escaping the racism of the South. Those who stayed kept to themselves.

Melungeons have filtered into all aspects of American society. Researchers claim that Elvis Presley and Ava Gardner may both have had a Melungeon heritage.

Brent Kennedy has received death threats from those who feel he is slurring their name by denying their Scots-Irish heritage.

But for many younger Melungeons, the idea that they may be linked to some of the very first settlers in the new world 400 years ago, has given them a stronger sense of identity, in a country which has forced them to hide it for centuries.