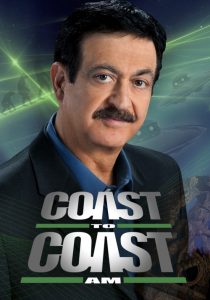 OPENING MINDS ONE SHOW AT A TIME

I remember the first time I listened to Coast to Cost AM, a 4 four hour late-night syndicated radio show. It blew my mind! I “never thought talk radio could be this exciting”! At the time the show’s host was still the original Art Bell, but Art was on his way to retirement and George Noory became the regular weekday host. The show’s topics range from government cover-ups, UFOs, ghosts and anything paranormal, and helps to open your mind to other ways of thinking. Coast to Coast AM was literally the first radio show I came across which could actually raise a person’s IQ.

Up to then, every radio talk-show I ever heard was pretty much either sports or politics. But not this show! And the best part is that no matter how “crazy” the topic, they always managed to have on experts, who had inside knowledge of the show’s topic. To me, George Noory WAS Coast to Coast AM. But who is this man?

The portion below is from Wikipedia

Noory grew up in Detroit with two younger sisters, the son of a Lebanese Egyptian who worked at Ford Motor Company and a Lebanese American mother. He became interested with the paranormal and ufology as a child and joined the UFO organization NICAP as a teenager. He attended the University of Detroit, spending two years in the pre-dental program before switching his major to Communications. He graduated with a bachelor’s degree in 1972. Noory served nine years in the United States Naval Reserve as a Lieutenant.

In St. Louis, Noory formed Norcom Entertainment, Inc., a company that developed and marketed video training films to law enforcement and security agencies. In 1987, Noory and his partners in Norcom Restaurants, Inc. opened the Café Marrakesh and Oasis Bar in Brentwood, Missouri. The restaurant’s theme revolved around a fictional English soldier, Col. William Berry, who opened the establishment following an exciting secret mission to Marrakesh.

In 1996, Noory hosted a late-night radio program called Nighthawk on KTRS in St. Louis, which caught the attention of executives at Premiere Radio Networks, syndicators of Coast to Coast AM. In April of 2001, Noory became a guest host for Coast to Coast AM before replacing Ian Punnett as the Sunday night host. In January 2003, following Bell’s retirement, Noory took over as weeknight host of Coast to Coast AM.

I owe much to my way of critical thinking, to George and Coast to Coast AM. Although in the past few years I haven’t been able to be a regular listener, the show has touched my life on many levels. I hope for a future where more folks listen to talk shows like this, and fewer political nonsense and gibberish. The world needs more George Noorys and fewer flavor of the month teen pop-stars.